It has been eight years since Batman vanished into the night, turning, in that instant, from hero to fugitive. Assuming the blame for the death of D.A. Harvey Dent, the Dark Knight sacrificed everything for what he and Commissioner Gordon both hoped was the greater good. For a time the lie worked, as criminal activity in Gotham City was crushed under the weight of the anti-crime Dent Act. But everything will change with the arrival of a cunning cat burglar with a mysterious agenda. Far more dangerous, however, is the emergence of Bane, a masked terrorist whose ruthless plans for Gotham drive Bruce out of his self-imposed exile. But even if he dons the cape and cowl again, Batman may be no match for Bane. Extra Content

Of all the "most anticipated" movies ever claiming that title, it's hard to imagine one that has caused so much speculation and breathless expectation as Christopher Nolan's final chapter to his magnificently brooding Batman trilogy, The Dark Knight Rises. Though it may not rise to the level of the mythic grandeur of its predecessor, The Dark Knight Rises is a truly magnificent work of cinematic brilliance that commandingly completes the cycle and is as heavy with literary resonance as it is of-the-moment insight into the political and social affairs unfolding on the world stage. That it is also a full-blown and fully realized epic crime drama packed with state-of-the-art action relying equally on immaculate CGI fakery and heart-stopping practical effects and stunt work makes its entrée into blockbuster history worthy of all the anticipation and more. It deserves all the accolades it will get for bringing an opulently baroque view of a comic book universe to life with sinister effectiveness.

Set eight years after the events of The Dark Knight, TDK Rises finds Bruce Wayne broken in spirit and body from his moral and physical battle with the Joker. Gotham City is at peace primarily because Batman took the fall for Harvey Dent's murder, allowing the former district attorney's memory to remain as a crime-fighting hero rather than the lunatic destructor he became as Two-Face. But that meant Batman's cape and cowl wound up in cold storage--perhaps for good--with only police commissioner Jim Gordon in possession of the truth. The threat that faces Gotham now is by no means new; as deployed by the intricate script that weaves themes first explored in Batman Begins, fundamental conflicts that predate his own origins are at the heart of the ultimate struggle that will leave Batman and his city either triumphant or in ashes. It is one of the movie's greatest achievements that we really don't know which way it will end up until its final exhilarating moments. Intricate may be an understatement in the construction of the script by Nolan and his brother Jonathan. The multilayered story includes a battle for control of Wayne Industries and the decimation of Bruce Wayne's personal wealth; a destructive yet potentially earth-saving clean energy source; a desolate prison colony on the other side of the globe; terrorist attacks against people, property, and the world's economic foundation; the redistribution of wealth to the 99 percent; and a virtuoso jewel thief who is identified in every way except name as Catwoman. Played with saucy fun and sexy danger by Anne Hathaway, Selina Kyle is sort of the catalyst (!) for all the plot threads, especially when she whispers into Bruce's ear at a charity ball some prescient words about a coming storm that will tear Gotham asunder. As unpredictable as it is sometimes hard to follow, the winds of this storm blow in a raft of diverse and extremely compelling new characters (including Selina Kyle) who are all part of a dance that ends with the ballet of a cataclysmic denouement. Among the new faces are Marion Cotillard as a green-energy advocate and Wayne Industries board member and Joseph Gordon-Levitt as a devoted Gotham cop who may lead Nolan into a new comic book franchise. The hulking monster Bane, played by Tom Hardy with powerful confidence even under a clawlike mask, is so much more than a villain (and the toughest match yet for Batman's prowess). Though he ends up being less important to the movie's moral themes and can't really match Heath Ledger's maniacal turn as Joker, his mesmerizing swagger and presence as demonic force personified are an affecting counterpoint to the moral battle that rages within Batman himself. Christian Bale gives his most dynamic performance yet as the tortured hero, and Michael Caine (Alfred), Gary Oldman (Gordon), and Morgan Freeman (Lucius Fox) all return with more gravitas and emotional weight than ever before. Then there's the action. Punctuated by three or four magnificent set pieces, TDKR deftly mixes the cinematic process of providing information with punches of pow throughout (an airplane-to-airplane kidnap/rescue, an institutional terrorist assault and subsequent chase, and the choreographed crippling of an entire city are the above-mentioned highlights). The added impact of the movie's extensive Imax footage ups the wow factor, all of it kinetically controlled by Nolan and his top lieutenants Wally Pfister (cinematography), Hans Zimmer (composer), Lee Smith (editor), and Nathan Crowley and Kevin Kavanaugh (production designers). The best recommendation TDKR carries is that it does not leave one wanting for more. At 164 minutes, there's plenty of nonstop dramatic enthrallment for a single sitting. More important, there's a deep sense of satisfaction that The Dark Knight Rises leaves as the fulfilling conclusion to an absorbing saga that remains relevant, resonant, and above all thoroughly entertaining. --Ted Fry

ATTENTION REQUIRED: The UV download for thiss product was expired on the 2nd December 2014 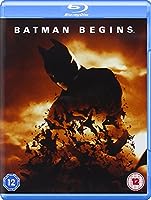