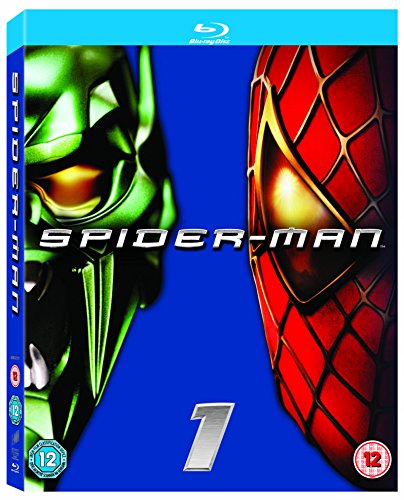 Please note this is a region B Blu-ray and will require a region B or region free Blu-ray player in order to play.Peter Parker (Tobey Maguire) is an ordinary guy who lives with his beloved aunt and uncle and quietly pines for the girl next door Mary Jane (Kirsten Dunst). But when a genetically-modified 'super-spider' bites him while on a school trip Peter develops unusual skills - fantastic acrobatic strength supernatural awareness and a talent for web-spinning. It's not until tragedy strikes at home that Peter decides to use his new powers to fight crime under a secret identity: Spiderman! When the evil Green Goblin (Willem Dafoe) attacks the good people of New York and endangers the life of Mary Jane Peter commits himself to the ultimate tests: to thwart his arch-enemy and to win the heart of the girl that he loves.Age Rating 12

Marvel Comics fans have been waiting for this big-screen Spider-Man since the character made his print debut in 1962, which attaches impossible expectations to a film that rates as a solid success without breaking out of the spandex ghetto in the way that Batman Returns or X-Men did. Tobey Maguire is ideally cast as speccy Peter Parker, a high school swot with personal problems. The suit and effects take over when he gets bitten by a genetically engineered (i.e., no longer radioactive) spider and transforms into a web-swinging superhero who finds that these super-powers don't really help him get close to the girl next door (Kirsten Dunst) or protect his elderly guardian (Cliff Robertson) from random violence. The villain of the piece is Peter's best friend's industrialist father (Willem Dafoe) who has dosed himself on an experimental serum which makes him go all Jekyll-and-Hyde and emerge as the cackling Green Goblin, who soon gets a grudge against Spider-Man.

Sam Raimi gives it all a bright, airy, kinetic feel, with wonderful aerial stuff as Spider-Man escapes from his troubles by swinging between skyscrapers, and the rethink of Stan Lee and Steve Ditko's origin story is managed with a canny mix of faithfulness (JK Simmons' as the crass editor JJ Jameson is the image of the comic character) and send-up (after a big introduction, Spider-Man finally appears in a really rubbish first attempt at a spider costume). Maguire and the impossibly sweet Dunst make it work as a hesitant teen romance, but somehow the second half, which brings on the villain to give the hero someone to fight, is only exciting when it wants to be affecting too. --Kim Newman